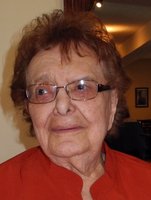 Lena was born in Union City on April 11, 1924 to the late Frank and Florence (née Montemarano) Yannuzzi and was a homemaker and lived in North Bergen for 54 years.