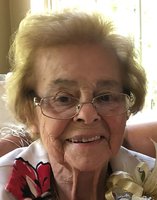 Marie Paule Nilsen, (nee Girard) Age 100, passed away on March 4, 2020. Beloved wife of the late Arthur (2008). Devoted Sister of the late Helena Tanguay (1999). Loving Aunt of Claudette Connolly (late John), Girard Tanguay (Rosa) and the late Denis Tanguay (Janis). Also surviving are several great nieces and nephews and great-great nieces and nephews. Marie was born on August 10, 1919 in Quebec, Canada to the late George and Alice (nee Methot) Girard and came to the US and lived in Fairview since 1952 and North Haledon for the last 13 years. She was a member of Sacred Heart Church, North Bergen and its Rosary Altar Society and the Daughters of Isabella. She retired as a bookkeeper from Kaywoodie Pipe Company in West New York, NJ. Visiting Hours on Saturday, March 7, 2020 from 9 AM to 10:15 AM at the Konopka Funeral Home, 9046 Palisade Ave, North Bergen, N J. Funeral Mass on Saturday at 11:30 AM at St. Paul’s Church, 286 Haledon Avenue, Prospect Park, NJ. Private Cremation to follow. Burial of her cremations at Fairview Cemetery at a later date.