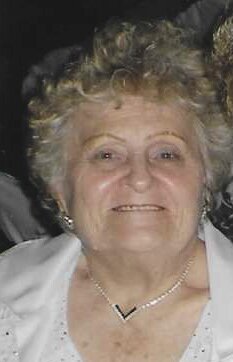 Please share a memory of Janet to include in a keepsake book for family and friends.
View Tribute Book
Obituary of Janet Novoczynski Born in Cliffside Park, New Jersey, Janet (nee Wyrzykowski), aged 94, passed away on August 25, 2021. Janet grew up with three sisters. As a young adult Janet worked at W.L.Cameron Company in North Bergen, where she met the love of her life, Henry Novoczynski. They later married in June 1947. The couple made their home in Brooklyn, New York, where they raised their five children. She remained there until her husband’s passing and re-located back to New Jersey living in Fairview, Iselin, Colonia and most recently, St. Joseph’s Senior Home in Woodbridge, where she was lovingly cared for by The Little Servant Sisters of the Immaculate Conception and wonderful staff. Although she wasn’t as mobile as she would have liked to be, Janet loved visits from her grandchildren. She was an avid reader, enjoyed word puzzles and playing bingo several times a week. Janet was preceded in death by her husband Henry in 1981 and her eldest son Henry in 2000. She also was preceded in death by her sisters Stella Jurkofsky and Dolores Kenny. She is survived by her daughters, Janice Menchaca, Carol Arevalo (Ruben), Elizabeth Matteo (Edmund), her son Stanley (Gail); her grandchildren, Brittany Erickson, Anthony and Nicholas Arevalo, Valerie and Debra Matteo, Nicholas and Alexa Novoczynski, Katerina Gallagher and Krista Riley. Janet was a proud great grandmother of nine. Further survived by sister, Irene Rutkowski, Janet will also be forever remembered by her numerous nieces, nephews, extended family, and dear friends. Even though she is gone, she has left the legacy of her love and perseverance. In lieu of flowers to the family, donations may be made directly to St. Joseph’s Senior Home, 3 St. Joseph’s Terrace, Woodbridge, NJ 07095 https://www.stjosephseniorhome.org/contribute/ Memorial Mass on Tuesday, August 31, 2021 at 11AM Sacred Heart Church 9034 Barr Place North Bergen, NJ 07047 Phone: (201) 943-0305 Internment Hackensack Cemetery 289 Hackensack Avenue Hackensack, NJ 07601 Phone: (201) 342-1475
To plant a beautiful memorial tree in memory of Janet Novoczynski , please visit our Tree Store

A Memorial Tree was planted for Janet
We are deeply sorry for your loss ~ the staff at Joseph Z Konopka Funeral Home LLC.
Join in honoring their life - plant a memorial tree
Online Memory & Photo Sharing Event
Online Event
About this Event

Look inside to read what others have shared
Family and friends are coming together online to create a special keepsake. Every memory left on the online obituary will be automatically included in this book.
View Tribute Book
Services for Janet Novoczynski
There are no events scheduled. You can still show your support by planting a tree in memory of Janet Novoczynski .
Plant a tree in memory of Janet